Below we'll describe two methods you can use to create your own Sabacc deck. Sabacc Decks have four suits including Staves,Cups,Flasks, and Sabres. Each Suit has cards numbered 1-11, and four suited face cards including Commander (12), Mistress (13), Master (14), and Ace (15). Additionally, each deck contains two of each special face card listed here: Queen of Air and Darkness: Value of -2 Endurance: Value of -8 Balance: Value of -11 Demise: Value of -13 Moderation: Value of -14 The Evil One: Value of -15 The Star: Value of -17 The Idiot: Value of 0 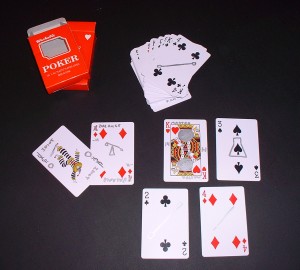 You will need 2 decks of regular playing cards with identical back patterns. Determine a mapping from the regular suits to the Sabacc suits (i.e. Clubs=Staves). Use 1-10,J,Q,K,A from each suit in one deck for 1-10 of the appropriate Sabacc suit, then mark the Jack as Commander (12), Queen as Mistress (13), King as Master (14), and Ace as Ace (15). You will now need to pull 2 cards from the second deck for each suit to mark as 1 and 11 of the appropriate suit. Now simply take some leftover cards from the second deck and mark them as the special face cards along with those face cards values (example: use the 2 Jokers as "The Idiot (0)"). When marking cards, I like to use a metallic Sharpie marker. Any metallic marker will hold to the plastic playing cards better than a permanent marker, but do not get puffy paint metallic markers as the marks will wear off when you shuffle. 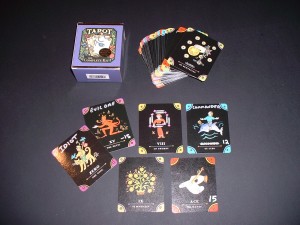 This method is much better, as it requires less marking. You will still need 2 identical decks of Tarot Cards based on the Rider-Waite Tarot. I would suggest cheap Tarot Decks, as many folks might consider marking up the beautiful artwork of a Tarot Deck sacrilege. For the suits, there is an easy conversion of Swords->Sabres,Wands->Staves,Cups->Flasks, and Pentacles->Coins. You should have much less trouble remembering the suit when looking at these cards. Now use the 2-10 of each suit from one of the Tarot decks to start your Sabacc deck, these will not require marking. Now take the Ace of each Suit from the same deck and mark it with a value of 15. Mark the Pages as 11's, the Knight as Commander (12), the Queen as Mistress (13), and the King as Master (14). You are unfortunately missing the 1 for each suit, for this, take the Ace from the second Tarot deck for each suit and mark it as a 1 (As a side note, I believe WEG messed up originally here and forgot that the Ace is the 1 in a Tarot deck, as the rest convert easily). Now simply mark up each of the cards listed in the conversion below from both Tarot decks to make the special face cards. It should be noted that in a Rider-Waite deck the Major Arcana you'll be marking will have the correct value, you just need to make it negative. Sabacc Tarot Idiot (0) Fool (0) Queen of Air and Darkness (-2) The High Priestess (II) Endurance (-8) Strength (VIII) Balance (-11) Justice (XI) Demise (-13) Death (XIII) Moderation (-14) Temperance (XIV) The Evil One (-15) The Devil (XV) The Star (-17) The Star (XVII)